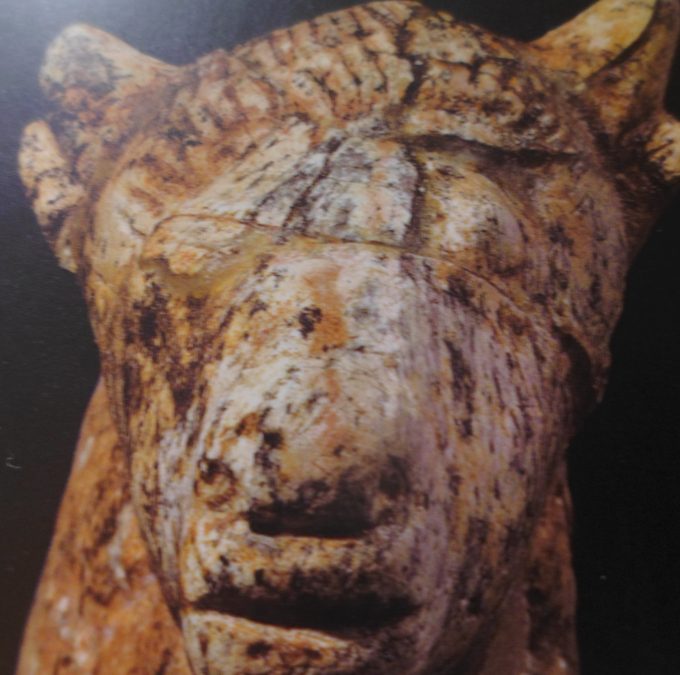 When an ecosystem is fully functioning, all the members are present at the assembly … Human beings come out of that wholeness, and to consider the possibility of reactivating membership in the Assembly of All Beings is in no way regressive

Gary Snyder, ‘The Practice of the Wild’

I’ve had my mind blown many times by the wonderful exhibition catalogue Ice Age Art: Arrival of the Modern Mind (British Museum Press) – and again today.

This naturalistic sculpture of a female bison was made 22,000 years ago, during the Ice Age, in what’s now Zaraysk, Russia.

It’s an ‘in-the-round’ sculpture, the proportions are pretty much perfect, and it’s showing a moving bison, not a static animal. The face is gentle, with the mouth slightly open as if calling. It was made entirely with stone tools – and then buried!

Someone took the trouble to make this during a period when it would have been a gargantuan challenge just to get up, have something to eat and basically survive another day. They still felt the urge to sculpt a bison on a piece of tusk. Wow.

“For us of the minority,” wrote Aldo Leopold in A Sand County Almanac, “the opportunity to see geese is more important than television.” Leopold wrote that in 1949.

I think that the Ice Age human who made this bison figure 22,000 years ago must have felt that it was extremely important to honour the bison by sculpting it – more important than the equivalent time spent hunting or gathering, fighting, love-making, eating or sleeping.

Much as I’m generally becoming a misanthropist collapsitarian, thinking about Ice Age art makes me feel a real connection with early humans. Not only is the art incredible but I think those people truly celebrate their inter-connection with the living world.

We’ve probably all got the same inter-connection with the living world buried down deep somewhere and it just needs bringing back. In fact, it’s our birthright. Perhaps it’s not that bad to be human if only we stripped off all the ridiculous layers and got back to what we’re supposed to be, i.e. part of the actual Living World of All Beings.

Greatness, in deep ecology, is cultivated through an understanding of humility, according to Bill Devall. We need to somehow find the humility to stop being ecocidal parasites and realise, as author Peter Reason has said, that we’re “just plain members of the biotic community”. Rediscovering our humility-in-the-world will help dismantle our millennia-old hubris, currently so rampantly destructive, and bring us back to ourselves.

Our society is so obsessed with the idea of scientific breakthrough, technological advancement and moving somehow ‘forwards’, but to really make progress humanity has to look back to where it came from. We don’t need to discover; we just need to re-discover.

It’s a big ask – but one worth asking. Because if we’re honest with ourselves,  we don’t really have any other options.