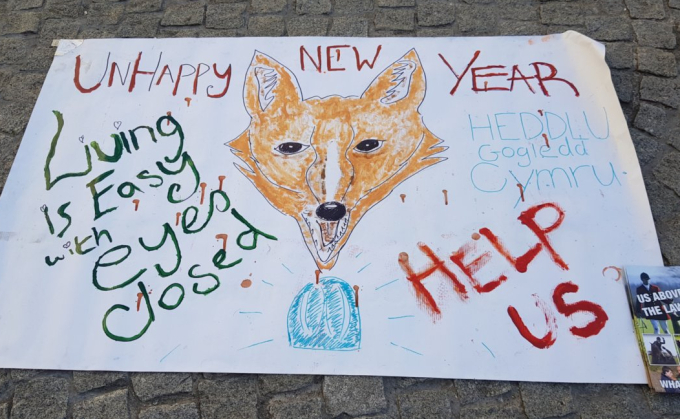 For it is important that awake people be awake”

William Stafford, ‘A Ritual to Read to Each Other

In a way, this is just another blog post about resisting the badger cull. But I don’t want to focus on us resisters – today I’m more interested in everyone else.

In a Dark Field

Last night, around 1:15am (so, strictly speaking, this morning), I was checking on a vulnerable badger sett in Cheshire, circling the copse where the sett is, sweeping my torchlight down the edges of the rain-beaten field surrounding the copse. Suddenly I caught a glimpse of a dark figure at the edge, tall and hesitant. My body somehow knew a split-second before my brain did that this wasn’t someone from ‘our’ side, and sure enough, as I ran forwards with my torch beaming, he fled the scene.

Within minutes, a colleague was with me and together we checked the area in some detail, but the man had scarpered. We stayed around a while, keen to make a show of patrolling the area in the hope of making him think twice about coming back, since he might well have been watching us from the trees or the nearby farmhouse. And while we were there, we saw a group of badgers, five in total, together in the next field – a couple of youngsters playing and some adults foraging. It was beautiful – but also frightening, because the two of us were looking on the scene in wonderment but knowing full well that other people very nearby could be looking on the exact same family group with the firm intention to kill them.

If things were different, if we had many more Wounded Badger Patrollers on our books, I could have stayed at that sett and guarded it, instead of having to continue on my ’rounds’ because we’re spread so thinly that we have to cover multiple routes in one night, leaving vulnerable setts unattended while we check on the next ones.

Last week our Wounded Badger Patrol Cheshire‘s Facebook page reached 1,000 likes. But here’s a bit of context for you: on a ‘good numbers’ night, we get around 30 people out on patrol for the whole of Cheshire. On many other nights, there are around 10 of us trying to cover as many routes as possible, often into the early hours when we have work the next morning. Which begs the question: where’s everyone else?

Where, though, are all the people who are ‘against’ stuff but who never actively do anything about it? Because my feeling is that they make up quite a significant percentage of the adult population.

Last night we were also pulled over and questioned by the police – for being on a public footpath at night. We’re sadly used to it, but afterwards we were laughing among ourselves about the way the police officers use the word ‘protesters’ – including to describe us Wounded Badger Patrollers, out pounding the public footpaths, which is our right and fully within the law.

We agreed that given the current state of the world, you’d be crazy not to be living in a state of active protest, and that the much more questionable activity is staying at home, drawing the curtains and letting it all happen. I suppose you don’t get pulled over by the police if you’re at home watching TV and telling yourself that everything is OK.

However. The more you pretend everything is OK, the less OK everything becomes. Isn’t that one of the great lessons from history?

In fact, we’re fully conditioned to think that things are OK. Even if our drinking water isn’t laced with sedatives, it might as well be, given the constant messages of apathy and obedience to authority that we imbibe from our earliest years in all our state institutions, including schools.

Things Are Not OK

Things are not OK when fellow citizens are serving custodial sentences for protesting against fracking. They’re also not OK when sleeping bags are forcibly taken from homeless people, or when ancient woodland is sacrificed for high-speed rail that no-one needs, or when our native wild animals are condemned to death ostensibly to support the ailing dairy industry – which is itself built on the immense pain and suffering of animals, all in the name of human profit. These things are not OK at all.

“Living is easy with eyes closed,

The words were used to great effect just last week on a friend’s banner protesting outside the Crown Prosecution Service in Liverpool. Living is easy with eyes closed. In a way, we could envy those people who sail through life ignorant of or nonchalant about what’s going on all around them, to other people, to animals, to the environment. But I’m guessing that most of us “awake people” don’t envy them.

Living With Eyes Closed is No Way to Live

They may have more leisure time, more money, less discomfort, less anxiety and less pain than us. Maybe. But living with eyes closed is no way to live. In fact, in many ways it’s not really living at all. You see, the very slightest rumination on apathy versus activism very quickly leads to some huge questions – the hugest. Almost immediately, we’re into asking what it means to be human, what it means to be alive, what life is for, and how we should live it. And even though I’m exhausted writing this because I was out so late in the fields, in the same breath I know I’m ‘more’ alive because of it. At least I’m engaged with the world around me, even if it’s tiring, thankless and frustrating.

I’m worried for those people who are letting it all happen. They have a false sense of security, and they’re sleep-walking. That’s never a good thing. You can kid yourself that it’s warm in your house, and safe in your house, and comfortable in your house with all its trappings. But as Angela Carter wrote in The Company of Wolves, “the wolves have ways of arriving at your own hearth-side.”

Freedom is not a gift from heaven. You have to fight for it every day.

We have to be awake, and we have to fight for what we believe in every day, no matter how much it looks to the naked eye that we live in a model of democracy (we don’t). We also have to fight for all the vulnerable people, and the land, and all the animals that live in the land. It’s a big ask, yes – but we should be up to the job.

Why? Because we’re awake – and it’s important that awake people be awake.

This post is lovingly dedicated to everyone out there in the fields of the cull zones and the fracking protest sites, “awake people being awake” while the others sleep.